I have had the new Dell XPS 15 (2013 model) for a few days and wanted to
share my experiences with it.

For 9 months, I was unable to find a suitable candidate.

In all honesty, I didn't really look at Dell too much. I have bought
Dells and always recommended them for years, but I felt sure that Dell
did not make a laptop that suited my needs. For a long time, the Mac
Book Pro was the closest match and had the 2013 model come with a touch
screen, I probably would have bought it.

I then saw someone on Twitter mention the new Dell XPS 15, so I went a
took a look and was pleasantly surprised.

I have the top end machine and the specs are as follows:

This laptop feels fantastic. It feels extremely high quality and I love
the keyboard. I don't have much experience with ultrabooks, so I don't
know how it compares weight-wise, but 2kgs (4.4lbs) for a 15.6" display
seems very good. 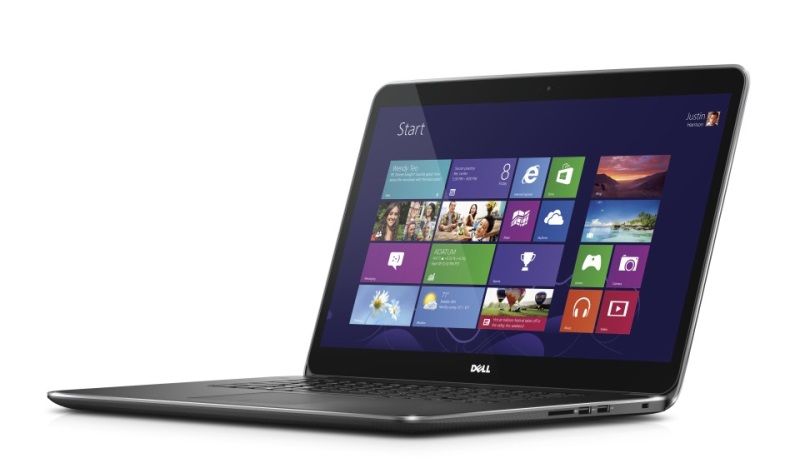 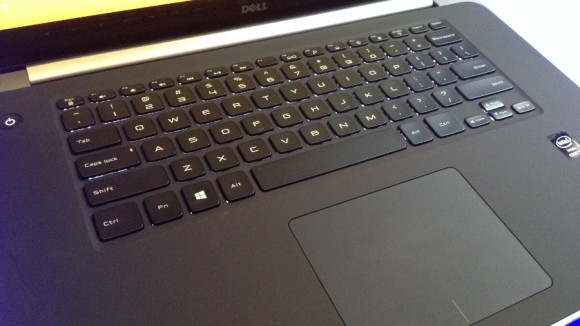 In my opinion, the feels is in the same league as a Macbook Pro and is
£500 cheaper.

The screen on this thing is incredible. It is most noticeable after you
have been using it for a while and then you go and use a "normal"
monitor. The difference is unbelievable.

A while ago Scott Hanselman did a review of the Lenovo Carbon X1. After
reading that review, I was very close to buying one, but I am pleased
that I managed to hold off. In the
review, Scott mentions the divisive screen on the Lenovo. He also took a few
pictures of it. I am going to try and recreate those photos with the
Dell XPS 15 and show them side by side.

The picture on the left is Scott's original picture, and the right is
mine. I took my picture with my iPhone 5S and I almost didn't post it
because the resulting picture is significantly worse than what I see in
real life. I don't know enough about photography to explain it, but the
image shows visible pixels which do not exist in the flesh.

The high resolution display (3200 x 1800) is absolutely gorgeous.
However, it seems like the windows platform is just not ready for it.
There are numerous issues with running Windows at this resolution. I
will go into these in a lot more detail later.

For the first two days of owning the laptop, the fan did not start at
all. It was like using an iPad; completely silent. This includes running
Visual Studio, Outlook etc. The first time I heard the fan, I was
copying files from an old laptop that I have over wifi. I put the Dell
in High Performance power mode so that it wouldn't go to sleep and
interrupt the transfer. I then put the laptop on the floor and the fan
started up within 5 mins. I am presuming that the fan started because I
told it to go into "High Performance" mode which effectively tells it to
change from passive cooling (lower CPU speed etc) to active cooling
(higher CPU speed). When on, the fan is not loud, but it did shock me at first, mainly because I had not heard it before.

I haven't had the device for long enough to really talk too much about
battery life, but what I can say is that it's the best laptop battery
life I've ever had. No, it's not in Macbook territory, but it's pretty
decent. Currently I'm seeing 5-6hrs of normal use. I would imagine I can
extend that, by turning off various things and putting it into a power
saving mode. But I will wait for my next long haul flight for that... or
maybe I'll just use the iPad.

I have read reports online reporting an 11 hour battery life in this
laptop. My experience is no where near that. I would say you would be
very lucky to get > 8 hours. In normal usage I still stand by my
original estimate of between 5-6 hours.

Some other users have commented that they are experiencing slow download
speeds over wifi. I must admit, I haven't seen this to be the case and
actually have observed the opposite. The default power settings for the
laptop say that when on battery the wifi should "Maximise battery
life" and when plugged in should "Maximise performance".

Below is a screenshot from
www.speedtest.net. This was taken whilst running on battery (WiFi set to maximise battery life) and on WiFi. 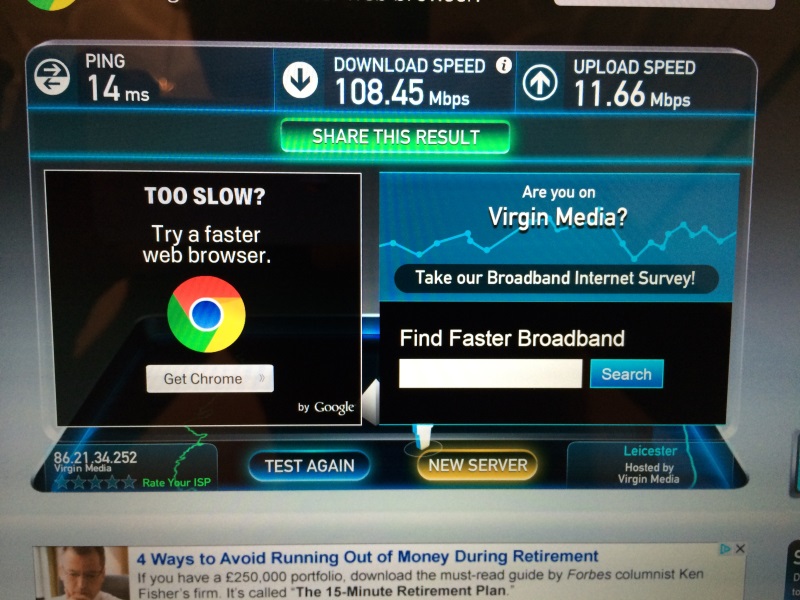 Yes... that is showing 110mbps download over wifi! This also proved that
the Wifi 802.11ac features work well. 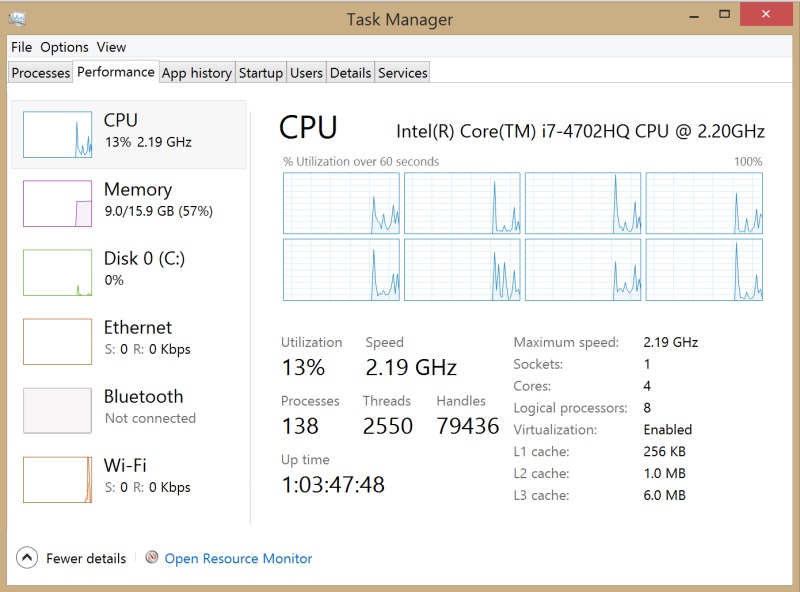 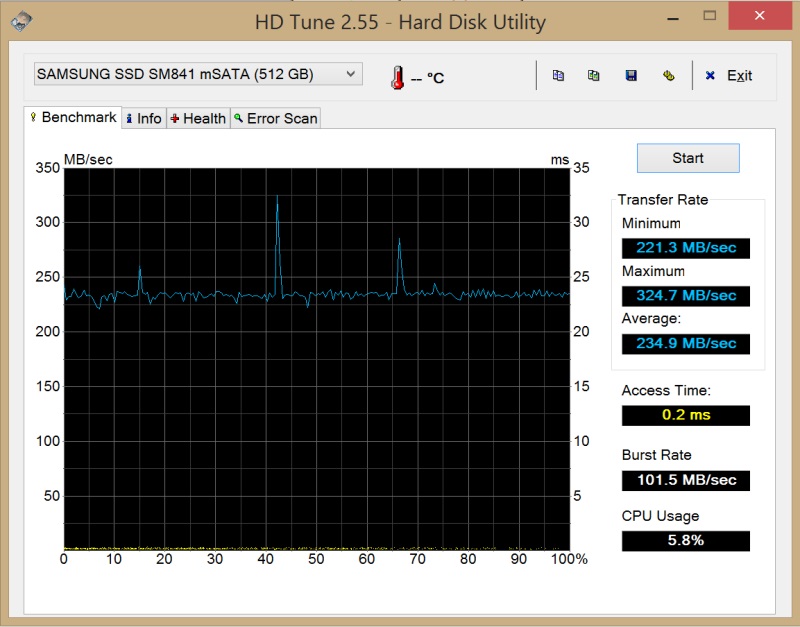 That seems like some pretty solid performance to me. I will say that
when the room is silent, there is a very slight audible whining that
comes from the HDD when it is being stressed, but the room has to be
very quiet for you to hear it. 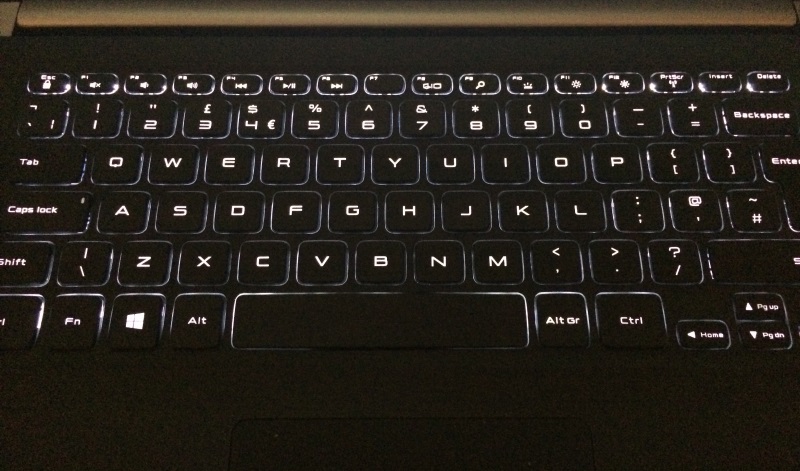 The Dell XPS 15 runs a monstrous 3200 x 1800 native resolution. This
all sounds fantastic until you actually try to use it. Windows 8.1
detects the resolution and applies font scaling automatically. These
settings are shown below. 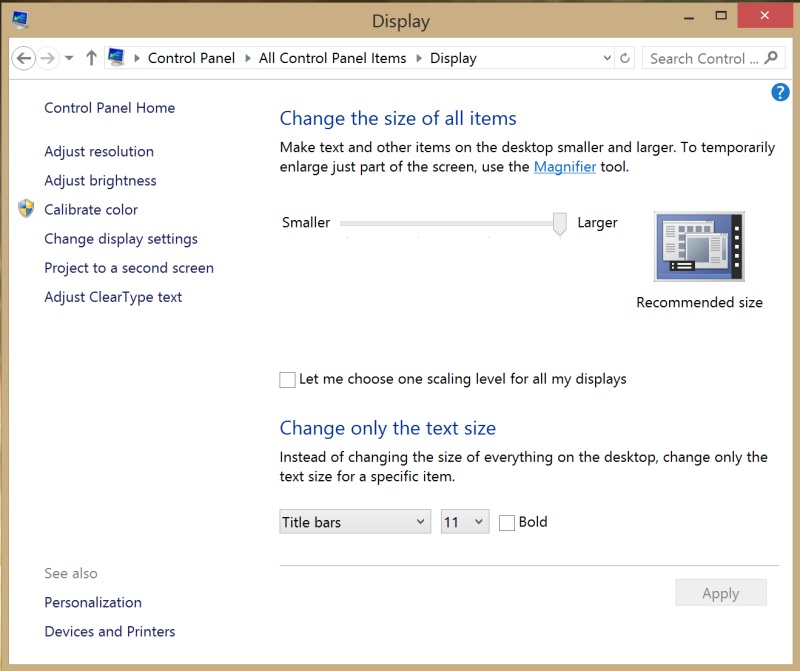 As you can see Windows defaults it to the largest option. With this set,
80% of the system is absolutely fine, however 20% really is not. Issues
range from minor cosmetic issues, to fundamental show stopping issues.

The first program I noticed with issues was Chrome. It just looked
wrong. The text was all blurry and was virtually unusable. I followed
this blog
post
to resolve the issues and whilst it has helped enormously, the issues
are still not resolved. Some examples are below. 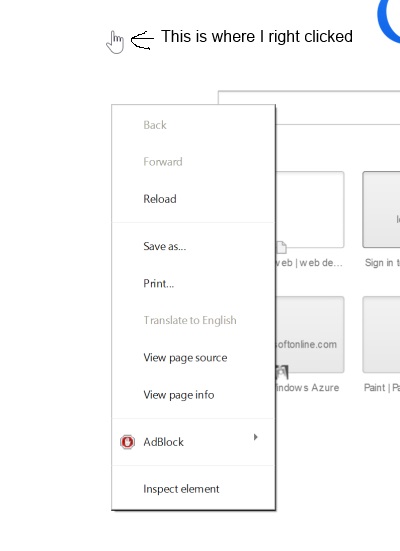 As you can see in the image above, the downloads bar looks very funky.
Not a major issue, but just another annoyance. 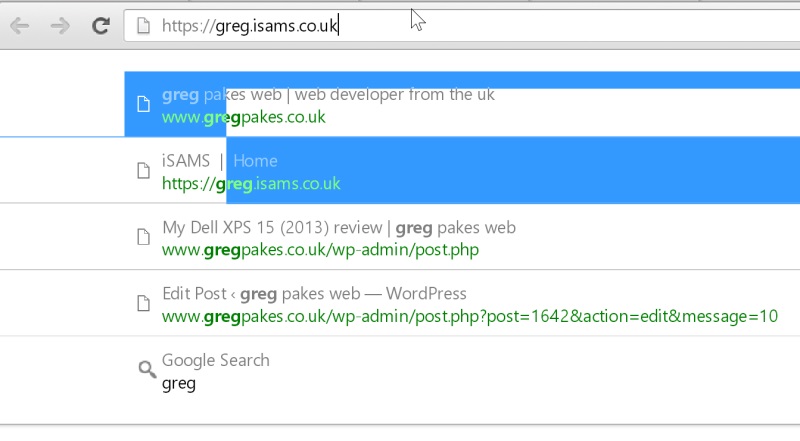 The Recently Changed window in dropbox is tiny. You have to get very
close to the screen to read what it says. 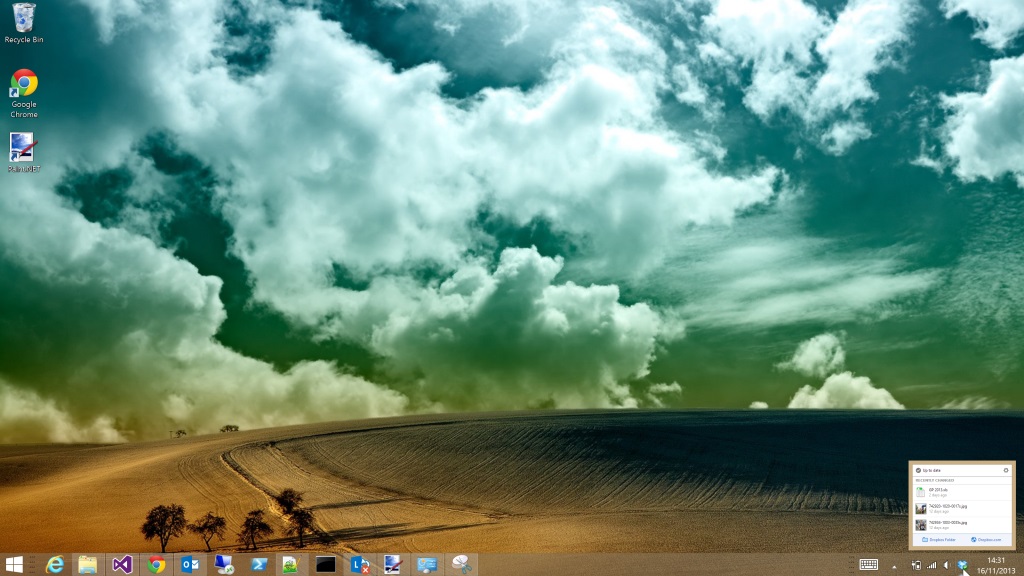 Remote Desktop (Not an issue per se, but a side effect)

When you Remote Desktop into an Operating System that does not support
scaling, it is very hard to use indeed. 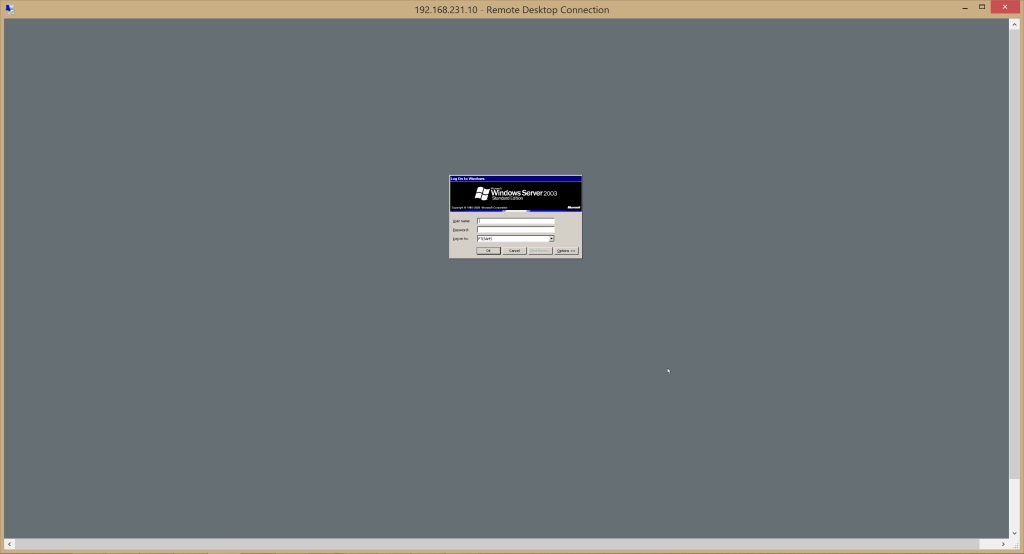 Parts of SSMS are unusable, but it generally just looks bad. 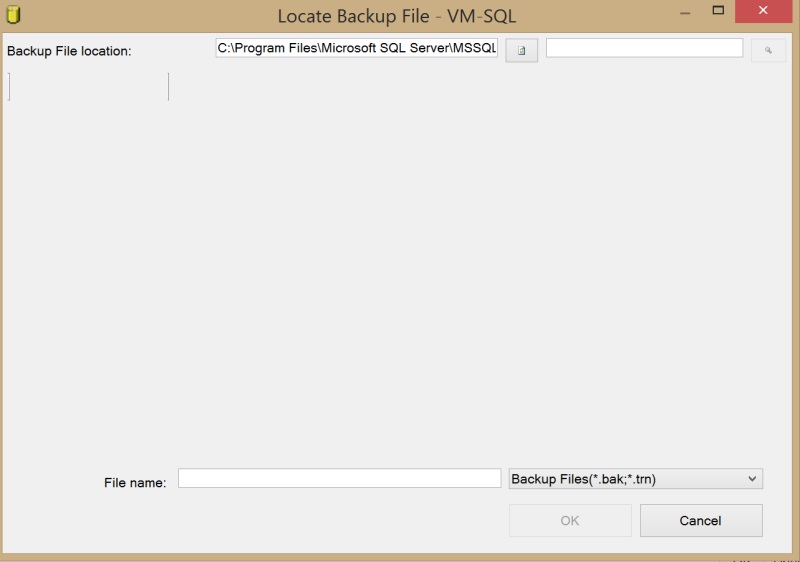 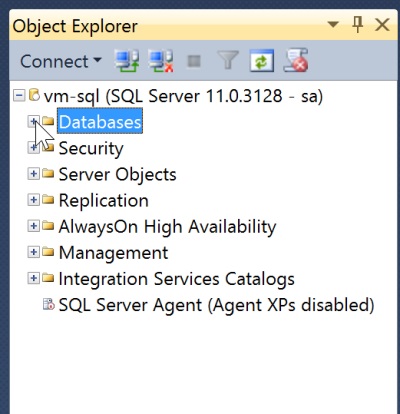 Powershell is unuseable. Command Prompt is better, but still difficult to use. 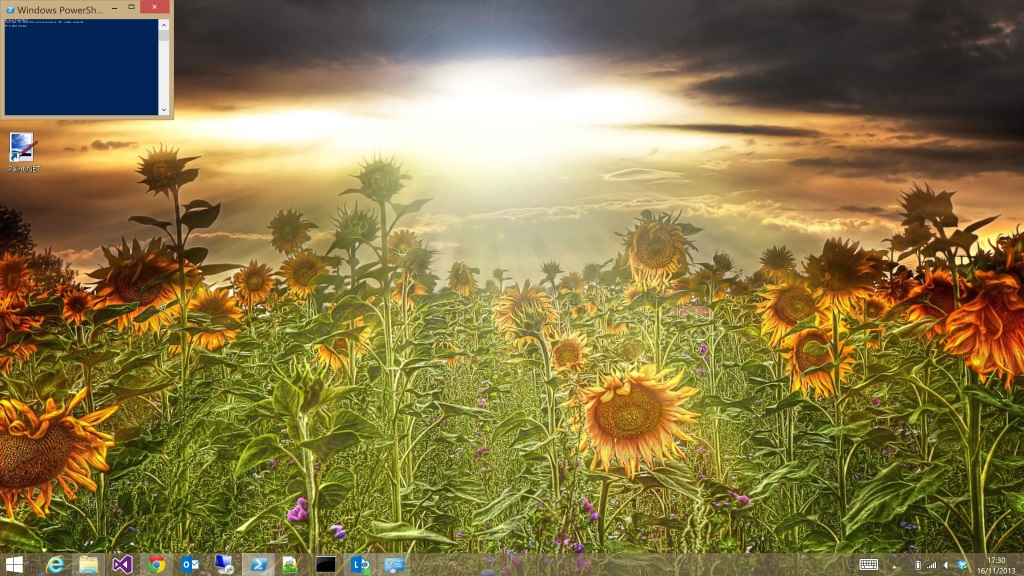 There are lots of issues in all sorts of different programs. Visual
Studio is one of the best programs. Generally speaking it is excellent.
The same can't be said for the current (8.0) version of Resharper.
JetBrains are aware of the issues, but most of their dialog windows and
text generated by Resharper looks terrible.

This is an epic laptop. I think the laptop is virtually perfect. Sadly
it is Windows letting it down. The display is simply astonishing,
however Windows support for high resolution displays is not quite there
yet.

I do think that the support will get better so I wouldn't use it as a
reason to avoid high resolution displays.

How to setup email alerts for when Windows Azure Backup fails

I have started using Windows Azure Backup, I think it's great, but seems to be lacking one major feature.…

I struggled with this for long enough to warrant a blog post. The Goal To wire up a TFS…